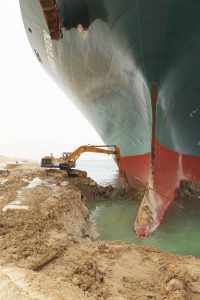 In March 2021 the Ever Given became lodged in the Suez Canal. That was just the beginning.

On March 23, 2021, heavy winds buffeted the 400 metre long Ever Given, wedging it sideways between the banks of the Suez Canal. The ship and the 18,000 containers it carried remained stuck for six days, shutting down one of the world’s key trading routes. Over 400 other ships piled up behind it as they were prevented from entering the blocked canal. The incident stalled USD$60 billion in trade and was a defining moment in the global supply chain crisis.

In the year since the Ever Given ran aground, very little has changed, and yet, in some ways, everything has changed. Here’s a look at the major maritime events of 2021 and what it can tell us for 2022.

The Suez backlog continued throughout the next month and quickly spread to other ports, leading to a Trans-Pacific container crunch as ships sat idle. Exacerbating the issue was the impact of North American port congestion on the global container imbalance which resulted in many containers going empty back to Asia. Officials at the Port of Los Angeles referred to the steady stream of incoming ships as their own “March Madness” and vowed to get the average 29 ships waiting at anchor down to zero. Spoiler alert: It didn’t happen. By mid-April, truck drivers represented by the Teamsters union went on strike at the Ports of Los Angeles and Long Beach. North of the border employees also went on strike at the Port of Montreal until they were forced back to work by legislators.

In May, container ships failed to keep up as demand continued to grow and the cost of containers surged. Speculation mounted on the production capacity of the three companies producing 80% of the world’s containers. A top maritime official launched an informal investigation into a possible container monopoly. At the Port of Los Angeles, officials continued to deal with a parking lot of ships, further delaying both existing shipments and returns to other ports.

By early June, desperate shippers were paying rates exceeding USD$135,000 per day to secure container ships, while Home Depot opted to contract its own ship in a bid to solve the problem. Chassis and labour shortages continued to hammer ocean carriers and train services while a massive crane collapse took out more containers in Taiwan. The port of Yantian, one of the world’s largest container ports, was shut down by Chinese officials as part of a zero-tolerance Covid policy when five crew members tested positive. It would remain stalled for weeks as upwards of 160,000 containers piled up on its docks. Major carriers cancelled sailings to Yantian, but that sparked a domino effect as other Chinese ports tried to absorb the extra volume and quickly became consumed by it as well.

As demand for ships continued to outstrip supply, ports continued to be plagued by disasters, both natural and manufactured. Wildfires in BC and the Western US fueled the container backlog as inland movement was disrupted by damaged rail infrastructure. Meanwhile, typhoons pummeled ports in China and other parts of Asia. Covid-19 counter-measures in Vietnam shut down both manufacturers and ports in that country, bruising the supply chain further. On the bright side, 106 days after it became wedged in the Suez Canal, the Ever Given was released and finally limped into the Port of Rotterdam.

Canadian Border services began a work slowdown “threatening a dramatic impact to Canada’s supply chain”. In China, Covid cases partially shut down the Port of Nighbo. Chinese coastal ports required a 14 to 21-day quarantine for imported cargoes after they departed from specific countries, further compounding existing shipping delays. Meanwhile, Los Angeles surpassed its own record with over 40 ships anchored and waiting in line to be unloaded. Canadian Tire Corp., in an effort to give itself some more supply chain flexibility, bought a 25% stake in one of British Columbia’s largest inland ports.

Chaos reigned in ports on both sides of the Pacific. The number of container ships anchored off Shanghai and Ningbo surged as 242 container ships waited for berths countrywide. As shipping charter rates topped USD$200,000 per day, Costco and Ikea followed Home Depot’s example and also chartered their own ships. A growing power crisis in Asia and Europe rendered Chinese factories powerless, further delaying manufacturing and exports ahead of North America’s busy holiday season. The TransPacific traffic snarl continued to worsen as the Port of Los Angeles backlog grew to 73 ships. The Port of Los Angeles and Long Beach rolled out pilot programs to test expanding nights and weekend hours.

Walmart joined the list of major companies chartering their own ships. An increase in shipping accidents throughout the year plagued the Pacific threatening traffic on that already clogged route. The latest resulted in more than 100 overboard containers on the Zim Kingston, followed by 10 containers – 2 of which contained hazardous materials – that caught fire aboard the same ship off Vancouver Island.  The Port of Los Angeles announced it would begin operating 24/7 in a bid to reduce the number of ships waiting at anchor. It didn’t work, and the backlog continued to grow. A new threat to shipping emerged as the price of fuel rose to its highest point since 2014.

Cybercriminal activity targeted the vulnerable shipping industry over the past several months, selling off access to critical information and logistics. Massive flooding in British Columbia essentially cut off Vancouver from the rest of the country, issuing in a state of emergency as rail lines and highways closed. Labour shortages continued to wreak havoc at most ports, with Covid-19 illnesses and lockdowns causing most issues.  The Port of Vancouver was then hit with another labour obstacle as truckers threatened to strike.  Marine fuel was up 47% since the beginning of the year and an estimated 3 million containers waited on ships at ports around the world.

The container shortage worsened as empty containers piled up at global ports, most simply at the wrong place or at the wrong time. Customers with spoiled products or outdated seasonal imports simply abandoned their containers. The Port of Vancouver ship backlog hit 60 while the empty container situation worsened across the globe. Over 70,000 sat empty on Los Angeles terminals or dock depots, with more than half remaining there for nine days or more. Worse, delays on routes from China to the US west coast increased steadily, with only three in 10 container vessels arrived on time at their destination.

Los Angeles hit a new record with 105 container ships waiting to berth. Waiting times to discharge or pick up cargoes in Long Beach near Los Angeles reached 38 days to 45 days. Multiple ports in China once again faced restricted access or shutdowns due to zero-covid policy impacting goods ahead of the Chinese New Year.

The number of ships waiting off the coast of California dropped to 66, however, this reflected ships being rerouted to other US ports, as countrywide the total number of vessels waiting for berths was comparable with early January numbers at 147. These reroutes continued to add cost and transit time to shipments on board. Nearly a year after the Ever Given, the Suez Canal toll hike adds to shipping costs, but it looks like that might be just the beginning. New annual contracts will likely lock in much higher shipping rates to compensate for higher fuel costs, longer transit times and port layovers. Despite a multilateral probe looking at possible collusion with shipping lines, it is unlikely these rates will drop anytime soon.

The Ever Given did not cause the current shipping crisis, but it did herald a series of unfortunate events that fed the current crisis. And now the world faces a new threat with Russia’s invasion of the Ukraine. This devastating war that has already claimed thousands of lives and the destruction of Europe’s “breadbasket” also threatens to increase inflationary pressures. Prices for fuel, food and metals are expected to soar. The ongoing computer chip shortage will be further devasted as Ukraine cannot ship necessary neon gas exports. Ukrainian ports have been closed, affecting trans-European shipping and by association world trade.

It does look like global Covid restrictions are easing in some parts of the world which could help ease clogged ports. It will take time for the supply chain to recover from the events of 2021, and no one expects a quick fix, but there are hopeful signs. Inventories are slowly being rebuilt across the globe, and higher interest rates could help ease inflation and demand. The US has pledged $450 million in port grants to relieve congestion and improve efficiencies which would have a positive impact on the global supply chain as North American port congestion greatly impacts global container availability and equipment imbalances.  As supply chain woes dominated the airwaves, it also led to an uptick in maritime tech deals, which could bring greater visibility to the industry, allowing for better planning and more streamlined operations.

With so much disruption and uncertainty these past couple years, one thing remains consistent: partnership and communication are more important than ever. Whether your freight moves by ocean or not, you will have undoubtedly experienced delays at the hand of these maritime events. Marine disruption and container imbalances directly impact rail, road, air and warehousing services. Staying on top of current issues can be challenging when individual incidents create such a ripple effect, and that is why we have taken the time to piece together the major maritime events that continue to impact the current global supply chain.  We believe understanding how and why costs have been increasing helps us navigate the current crisis, find solutions and mitigate the impact. Even though 2022 will continue to be a difficult year for shippers and carriers alike, together, we can create supply chain solutions. Visit our website to learn more about our end-to-end, transport, logistics, intermodal and distribution services.